was founded in 2002 by Phil and Debbie DuFrene to help local Christians plant evangelical outreach ministries to seafarers, particularly in developing countries.

The idea for Port of Hope Ministry started back in 1995 when Phil's travels for the JESUS Film took him to port cities in the Caribbean and Latin America. The ports were busy but none had an outreach ministry to seafarers. Why couldn't local Christians be encouraged and trained to minister to the seafarers who visited their ports?

They have started a ministry to seafarers in Georgetown Guyana, which is under the direction of Chaplain (Reverend) Darrio Henriquo.

They also founded Port of Hope Ministries Canada and are involved in a ministry  to seafarers at the Fraser-Surrey Docks in Surrey, British Columbia, Canada.

In the USA they are working to start a ministry in Anacortes, Washington. They also write and publish most of the literature they distribute.

The DuFrenes have served in missions for over 35 years. They have served in Indonesia, Canada and the US, and went to numerous countries throughout 15 years with Campus Crusade for Christ's JESUS Film Project.

PORT OF HOPE Ministries is a faith-based ministry. It relies on God to supply all the ministry's financial needs. It is a 501(c)3 tax exempt organization in the US and a Registered Charity for Income Tax purposes in Canada. Donations can be made at the Port of Hope website.


Phil and Debbie have served in missions since 1976 in Indonesia, northern Manitoba and Saskatchewan, British Columbia and Florida. Phil has been a missionary pilot and they have been missionaries to First Nations people.

Phil is an ordained Southern Baptist minister and they both are commissioned Workplace Chaplains with the North American Mission Board of the Southern Baptists. Phil and Debbie are Civil War re-enactors where Phil portrays a Union (Northern) battlefield chaplain. Phil also conducts a chaplain training seminar.

They have three adult sons and a daughter, a daughter-in-law and son-in-law and five grandchildren, and live three blocks south of the Canadian border in Sumas, WA. 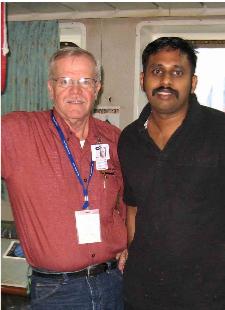